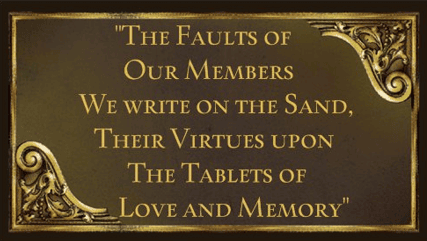 WHY BECOME A MEMBER?

BECAUSE... We Elks are a nation-wide fraternal organization of well over 1.2 million American citizens. We love our country and desire to preserve its cherished institutions, traditions, and values. We respect our neighbors and constantly seek to promote their well-being. We love and enjoy life and believe this enjoyment is increased by sharing it with family, friends and all with whom we come in contact.

BECAUSE... We seek to bring into our fraternal family only those who delight in wholesome associations with congenial companions. Only persons who possess a deep sense of patriotism, fair play, chivalry and dedication to noble causes. Persons who find the fulfillment of their existence in service to humanity, desiring to join in feeding the hungry, sheltering the homeless, aiding those in distress; proving themselves to be true friends to all in need.

BECAUSE... We lead no one to our doors with any promised material benefits or fame. We pledge no advancement of personal or career ambitions; instead, we want to help each other become better and happier persons. We believe in not merely wishing others well but in manifesting this belief by deeds, seeking to serve rather than to be served. To Elks, laughter is better than tears and a kind word is more powerful than a frown. The dream of a better world becomes reality when shaped by enough willing hearts and hands.

BECAUSE... We neither question one's religion, nor do we exclude anyone because of creed, race, ethnic origin, educational attainment, vocation, material status or physical stature. We measure character by what one is and does, not by titles or position. We do not seek to impose different beliefs in place of personal commitments to God, Family, and Country, nor do we ask anyone to act in any manner contrary to the dictates of conscience. We do not permit religious or political differences to intrude into or have any effect upon fraternal deliberations at the local, district, state or national levels.

BECAUSE... You can join with the millions of fine and noble American citizens who have helped better the destiny and way of life for countless thousands in our country for over 135 years. The generosity is without fanfare and often even without the recipient's knowledge. You may even have been helped at some point along the way. We have always been there, quietly providing help and encouragement. Now it's your turn to get involved, to join America's quiet humanitarians, and begin giving your life new purpose and fulfillment. You'll never have to stand alone in an uncaring world around you. Now you'll have a nation-wide family of women and men.

BECAUSE... We expend over two million dollars yearly to bring encouragement, cheer and comfort to hospitalized veterans throughout the United States in fulfillment of our solemn pledge: "So long as there are veterans in our hospitals, the Benevolent and Protective Order of Elks will never forget them."

BECAUSE... Through the Elks National Foundation, a perpetual fund with assets exceeding three hundred and twenty million dollars, we provide several million each year for college scholarships, grants for higher education to children of deceased Elks and other charitable, benevolent endeavors.

BECAUSE... Through our local Lodge, district, state, and National programs, we provide healthful activities, guidance, and assistance to over eight million boys and girls every year. We fund scholarships, athletic teams, summer camps, scouting, and drug education programs. We encourage civic, environmental and patriotic involvement through essay contests, seminars, and distribution of materials; as well as family-oriented activities in our Lodges.

BECAUSE... Elks operate numerous camps, hospitals, clinics, training centers and in-home services for the care and treatment of children and adults with physical disabilities including vision and speech problems, as well as mental impairment and emotional problems, all across the country.

BECAUSE... In approximately 2,100 Elks Lodges throughout the United States, individuals prominent in public, business and professional life can be found. In these Lodges, located in the principle cities and towns throughout America, the handclasp of fraternity and a warm welcome as a visiting member await you.

BECAUSE... The Elks Lodge in your community affords you the opportunity to join your neighbors and friends, and take a prominent role in the improvement of community life.

BECAUSE... The cardinal principles of the B.P.O. Elks are Charity, Justice, Brotherly Love and Fidelity. With the practice of these virtues, your community will be a better place in which to live.